Karan Johar is one of the most prolific members of the Bollywood film industry. Anyone admits it or not, everyone loves him for the after effects his movies have. Those movies dripping with emotion and compassion can melt anyone.

The glamorous teenagers, their side kicks, posh locations and songs flowing with love have always left us with a plethora of different feelings. However, when it comes to the KJo magic, there are some tricks which have been used at multiple occasions in the movies directed by him. Here are a few things which you usually notice in almost every Karan Johar movie.

Shah Rukh Khan not only rules the B-town but he has been on most of the Karan Johar movie posters as the lead. For some strange reasons, he is always fighting for love, against a terminal disease or both. Karan Johar always gives SRK a huge problem to deal with and then the entire movie is centered on how he finally fixes it.

2. Death always comes with a twist.

Karan Johar is obsessed with death. As satanic as it sounds, the sugar coated deaths in Karan Johar movies always mark a turning point of the film even making his beloved SRK take a tour of States with his bag and diary on one occasion. For example, death of Rani Mukherjee in Kuch Kuch Hota Hai, death of Kajol’s father in Kabhi Khushi Kabhi Gham, death of Kajol’s son in My Name Is Khan, death of Sidharth Malhotra’s grandmother in Student Of The Year. 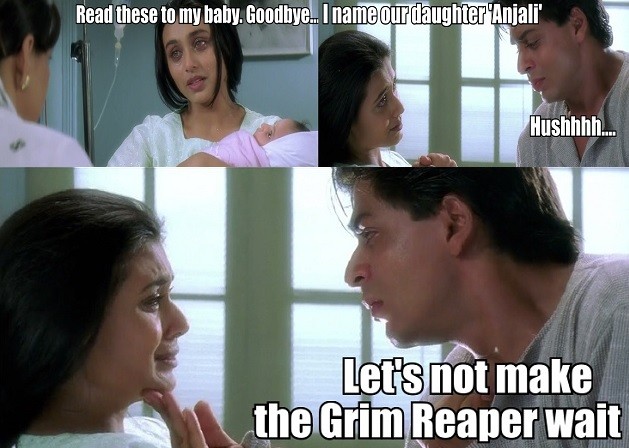 Apparently, KJo always boycotts the principles of the great Kaka when he is making a film. The density of the tears in his movie is measured in KJo/m^3 instead of kg/m^3 and the volume is very large. The smallest of things can explode the ovaries of the female characters and that scene is in sync with the symbolic melody of the film.

4. And “Paise ki kami nahi hai” – everyone is freaking rich!

This statement is very appropriate for the overly loaded families of Karan Johar movies. People are just very rich who wear the best of clothes and drive the best of vehicles. Karan’s version of poor is a guy wearing RayBans and a black leather jacket on the first day of school. In his world of logic, if there are n families in his movie, at least one of them is rich with the maximum being n.

Apparently, Karan Johar tries to be different by choosing three leads instead of two and then that movie goes around those three loving and hating each other thus creating a love triangle. He went the extra mile with KANK and enlightened us with the concept of wife swapping. However, the female lead faces the biggest dilemma of choosing between the two gorgeous male characters. Sadly, Karan Johar is usually mean to Rani Mukherjee who spends minimum time with SRK in his films. 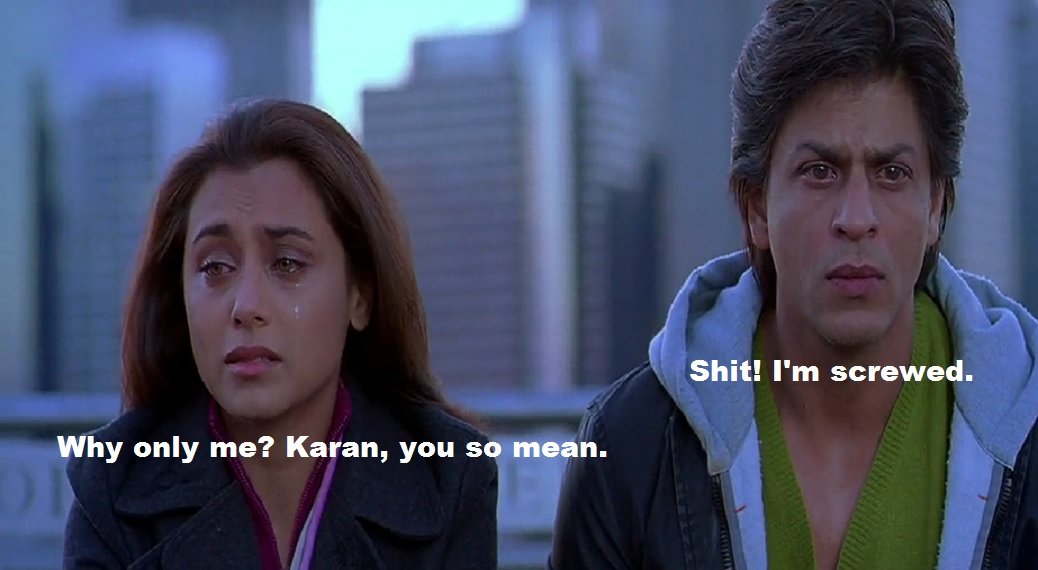 6. And his movies are never complete without one classic disco number.

KJo has never failed to give us a new dancing number for our playlist with every film he has ever made. Be it ‘Kehdo na Kehdo na’, ‘It’s the time to disco’ or ‘disco deewane’. KJo’s characters love to party and party hard. Also, these songs are accompanied with their personal dance moves which are shown at every party or disco night afterwards.

7. The homo effect: there are always some characters doing gay things.

This effect has been depicted in recent Karan Johar movies where one of the side male characters has a soft corner for another well-built actor. We are not trying to imply anything but if the trend continues, we are looking at movies like ‘Kabhi Khushi Kabhi Bum’, ‘Baal Ho Na No’ or ‘Student of the Rear’.

9. So basically, all his movies are unrealistic and give us false hopes.

Karan Johar movies are the epitome of false hopes as he creates a world where people get sad, more sad, a bit happy, sad and then very happy. The universities have state of the part facilities and everyone is good looking. The characters finally get the love of their life they have longed for this entire film and everyone is jolly. I wish we lived in his world.