College Team Trains, a company that sells wooden toy trains featuring logos and colors from popular colleges and universities, announced their plan to raise money to fund children’s cancer research at St. Jude Children’s Research Hospital in Memphis TN during the men’s NCAA Division I basketball tournament. Throughout March Madness, the company will donate a dollar from every sale made directly to the hospital as well as donating products to children at the hospital. 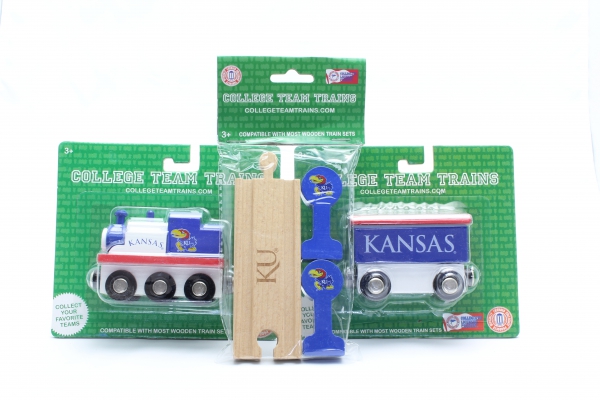 As college basketball fans across the country prepare for the 2017 NCAA Men’s Basketball Tournament, College Team Trains announced today they would donate $1 of every sale during March Madness to help sick children with their Donate-A-Dollar campaign.

College Team Trains owners Mark Bailey & Randy King say they’ve always admired St. Jude and the work they do in helping to treat and to cure childhood illnesses. He said they’re thrilled to be able to give to an organization that has given so much and done so much good over the years for children and their families. St. Jude Children’s Research Hospital, located in Memphis, Tennessee, is one of the world’s premier pediatric cancer research centers.

In addition to their Donate-A-Dollar campaign, the company has pledged to donate products to the hospital as well as other children in need throughout the year. Said King, “There’s something about a train that sparks a child’s imagination. The adventures and places that train can take them are limitless and can captivate their mind for hours at a time.”

When asked what motivated the company to give back , King responded, “College Team Trains is excited about giving our trains to less fortunate or sick children who otherwise may not have had these toys. As they grow older, we hope they will look back on their times playing with these trains with fond memories.”

He said anyone who purchases College Team Trains will now know they get the best wooden toy trains licensed by the NCAA and they’ll also be helping sick children. The company will donate a dollar for each sale during the NCAA basketball tournament.

The company hopes that donated products, which feature official NCAA school logos and colors, will provide families joy and entertainment with the added bonus of “inspiring a bright, happy, and successful future” says Bailey.

The March Madness Donate-A-Dollar promotion simply continues a tradition of giving back that has been present from the company’s beginnings. “College Team Trains has a long history of community involvement and we’re glad to be expanding our culture of charitable giving to allow our customers the opportunity to get involved”, says King. In the past, the company has donated to groups supporting disadvantaged children, families of the military, and others in need.

College Team Trains was founded in 2011 and is a collegiately licensed wooden toy train company in the toy train industry. It is known for high quality wooden toy trains branded with official NCAA logos and colors that offer compatibility with other popular wooden train brands.