The Pop Meets Funk Exhibition explores art from the Funk and Pop art movements from the 50s, 60s, and 70s 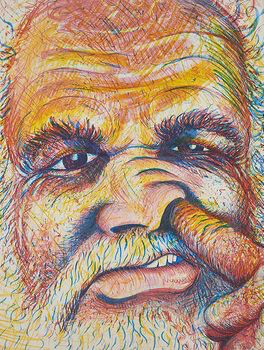 Funk was a Northern California art movement based mainly in Davis and Berkeley throughout the 60s and 70s. This movement exaggerated and elevated the medium of ceramics, often using political or autobiographical subjects. In response to the cool, detached minimalism in New York, Funk art made use use of bright colors, lewd humor, and bizarre narratives. and This zany new approach to art brought a group of people together in the early 1960s that would become well-known funk artists in the coming years. The early days at UC Davis where funk art flourished were made possible by pioneers like Robert Arneson, Roy De Forest, William T. Wiley as well as like-minded individuals in the Bay Area like Peter Saul and Clayton Bailey.

Starting in the mid 1950s, Pop art also challenged traditions of fine art by including imagery from pop culture such as ads, comics, and mundane mass-produced objects. One of the aims of Pop art is to use images of popular (as opposed to elitist) culture in art, emphasizing the banal or kitschy elements of any culture, most often through the use of irony. Some of the pioneers and leaders in this movement were Roy Lichtenstein, Andy Warhol, Robert Rauschenberg, and Jasper Johns. Although some Funk artists continued to make art for many decades, the movement itself ended in the late 70s. Meanwhile, Pop art became a much larger movement that continues to this day.

Art of Painting in the 21st Century Online Conference Next Weekend
Apr 10, 2021
Learn From Ceramic Artists With These Virtual Art Workshops And Classes
Feb 25, 2021