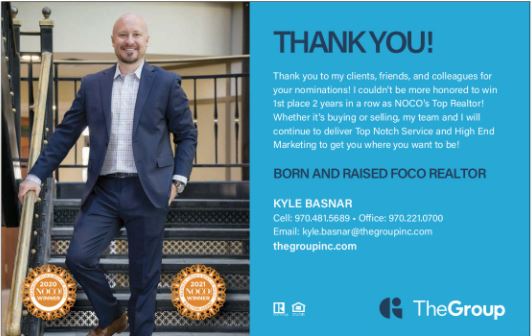 Kyle Basnar of The Group, Inc. in Fort Collins, CO has been voted number one REALTOR in this year’s Best of Awards, sponsored by NOCO Style Magazine, a Mountain Media publication based in Loveland, CO. This is the eighth year of the awards, which are announced in December after a three month voting period for nominees. Individuals and businesses are nominated by community members and those receiving the highest numbers of nominations are then added to the official ballot. The awards span multiple industries, including real estate, in which Basnar was selected for the top spot.

This is Kyle Basnar’s second year in a row winning the #1 REALTOR award in this competition and since last year’s award, Basnar has continued to escalate his real estate achievements, delving deeper into the region’s luxury market while continuing to represent buyers, sellers, and investors in all levels of real estate transactions. Recently, Basnar announced dedicated expansion of his business into the Red Feather Lakes, Colorado area, which is located up the Poudre Canyon, west of Fort Collins.

Kyle Basnar is a born and raised Fort Collins native who attended Colorado State University and built a solid career in the hospitality and service industry. There, he became deeply connected to the community and then made his move into real estate in 2015. Since then, he has worked at Windermere Real Estate and now The Group, Inc. at their Mulberry Street office, which is located in downtown Fort Collins. Kyle Basnar specializes in residential properties and has quickly earned his place in the top echelon of REALTORS in the region.

In addition to being selected as last year’s winner of the Best REALTOR category, Basnar was featured as the cover story in Real Producers Magazine, a regional publication that targets and promotes REALTORS who are in the top 3% of licensed real estate professionals in Northern Colorado. He has also earned multiple other designations and recognitions for his work and successes.

Known as a “hometown guy,” Kyle Basnar’s extensive network, proven sales abilities, and continued commitment to the Fort Collins community and State of Colorado have helped him to quickly carve out a solid reputation among his colleagues and clients. His awards have been based on service, commitment to quality, transactions, and community involvement and have been the result of nominations and votes by his clients and personal network.

Kyle Basnar is married to wife, Elizabeth, an elementary school teacher in Fort Collins, and is the stepfather of a daughter, who attends high school. He is currently involved in many local charities and has served on boards of directors in the area, including Neighbor to Neighbor, a charity dedicated to providing housing resources and assistance to families in need.

How a Mortgage Broker Can Help You in a Soaring Property Market
Will Microsoft’s Activision Purchase Impact Crypto Gaming? Jan 2022 WAX Report
Book This 1879 Restored Historical Boutique Hotel On The Lower East Side Of NYC
Sotera Wireless’ Remote Patient Monitoring Solution Is Now In The Netherlands