The House of Faith & Fashion: What My Wardrobe Taught Me About G-d Book Release

The House of Faith and Fashion: What My Wardrobe Taught Me About G-d releases on May 13th, 2021. The attention-grabbing cover was designed by none other than Elizabeth Sutton, giving perfect visual representation to the beauty found in the content inside. 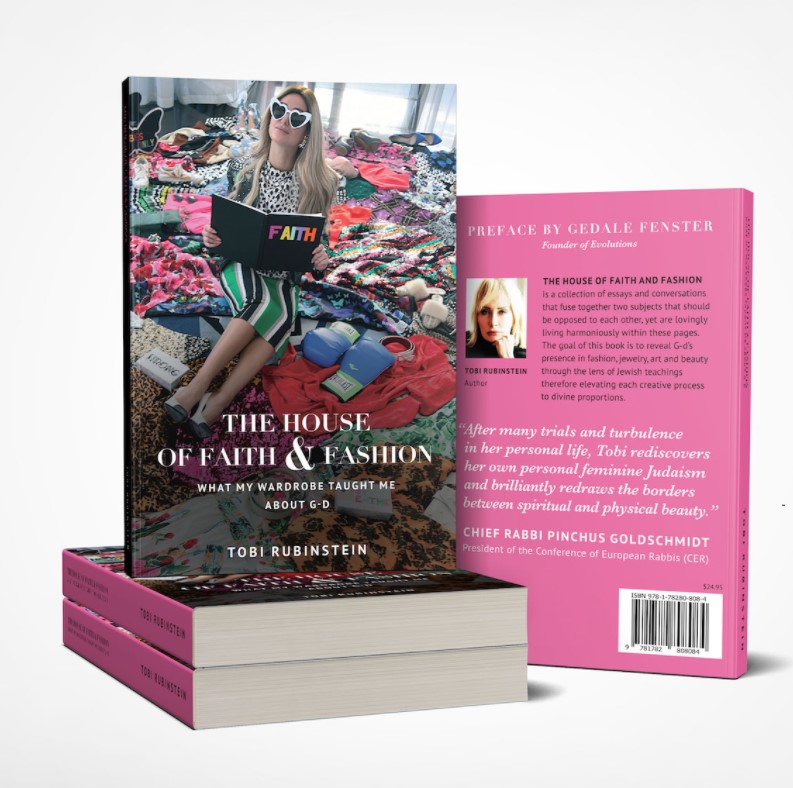 New York, NEW YORK — Tobi Rubinstein has become a trailblazer in the fashion industry, taking two ordinarily unrelated paths and merging them to create something uniquely her own that she’s now ready to share with the world.

The House of Faith and Fashion: What My Wardrobe Taught Me About G-d releases on May 13th, 2021 and is a collection of essays and conversations that fuse together fashion and faith — two subjects that are traditionally juxtaposed, yet are brought together seamlessly within these pages, as if they had always belonged and had never existed separately. The attention-grabbing cover was designed by none other than Elizabeth Sutton, giving perfect visual representation to the beauty found in the content inside.

Through The House of Faith and Fashion, Tobi works to reveal G-d’s presence in fashion, jewelry, art, beauty, and style through the unique lens of Jewish teachings. She completed the book during the fight for her life against Müllerian ovarian cancer, an aggressive carcinoma requiring equally aggressive medical care.

Through her cancer diagnosis and the challenges of treatment, Tobi created an extraordinary chronicle of faith and fashion that elevates the creative process to divine proportions. Her collection of thoughtful, profound, and sometimes poignant essays illustrate to readers how the creation of fashion and art can become a channel through which to express one’s faith and connection with their spirituality.

The House of Faith and Fashion began as a weekly column for a local newspaper and has since flourished to a robust treasury of essays that weave spirituality into every aspect of the fashion and creative industries. The book continues Tobi’s work with top international designers, fashion editors, jewelers, artists, and influencers like Manolo Blahnik and Carolina Herrera. Tobi weaves spiritual awareness into her work with fashion figureheads at events like the Metropolitan Museum’s Costume Exhibit and New York Fashion Week to create an opus that takes a fresh new look at style and spirituality.

“I definitely found my niche, that’s for sure,” Tobi explains. “Nobody else has put together chief Rabbis and fashion editors together to discuss their craft and then bring it all [together] with clear Biblical and Judaic thought,” she says.

The book is clearly organized and divided into five chapters, each with about twelve to fourteen essays. This format is designed specifically to make the book easier to pick up and put down as needed to fit busy lifestyles.

“It’s not really about me; it’s not my memoir,” Rubinstein says. “I became ordained as a path to gaining more understanding and digging deeper. It’s not necessarily a title I go by. I’ve learned that my title is myself and that titles really don’t matter in life. It’s about relaying your message in a way that you can impact people. [I believe] that creativity on all levels is a gift from G-d.”

“For so many decades, fashion, art, jewelry, and beauty has been looked at in this vain, purposeless, self-contained way,” Tobi continues. “I’m putting a new layer to it, saying ‘No, it’s not.’ In my first essay, The Haute and the Holy, I talk about the fact that the Metropolitan Museum of Art’s most successful costume exhibit was Heavenly Bodies, about the Catholic church. I refer back to the two chapters in the Bible about the outfit of the high priest, which is the most ornate, couture outfit you could think of, from the jewelry, the lace, the colors, the dying, the patterns, the gold trim, and the placement of the gems.”

In this never-before-seen collection of visceral, thought-provoking essays, readers will discover that faith and fashion aren’t necessarily two separate roads. Biblically, clothing had great importance; purple robes were reserved for royalty because the dye was so rare and costly to make. Spirituality has never taken such a practical turn before, framing the beauty of creation within the lens of the fashion industry.

Tobi summarizes the book best with a single phrase: “The House of Faith and Fashion” ultimately pays homage to the first master couturier, which was G-d.”

Tobi Rubinstein began her notable career in fashion after being brought into the industry by an exclusive manufacturer for Victoria’s Secret and JC Penney. Tobi then licensed with Nicole Miller for Childrenswear and helped develop Crunch Gym’s popular activewear line. In 2001, Rubinstein and her partners created “Chedda,” an innovative men’s urban clothing line designed for mass-market release at K-Mart.

In 2011, Tobi took a leap into reality TV and a successful lecture and radio series by creating The House of Faith and Fashion. Her goal was to consistently fuse creative outlets like fashion with spirituality. She made media appearances on WABC, WNBC, Lifetime, I24, Huffington Post, Page Six, and other outlets, having the opportunity to fashion icons like Patricia Fields and Badgley Mischka about their faith within their craft.

Tobi found further meaning by in-depth study of Jewish thought and teaching. This led to the combination of both her loves into one solid purpose — The House of Faith and Fashion: What My Wardrobe Taught Me About G-d.

The House of Faith and Fashion

Get Designer Swimwear & Beachwear For Your Personal Style With This Online Shop
Customize Rings With Ethically Sourced Diamonds From This Brampton ON Company
Proposing? Find Affordable Engagement Rings At This Eau Claire, Calgary Jeweller
This Calgary Jewellery Store Can Create A Custom Diamond Engagement Ring For You
More ...