Teaching children to be aware of issues such as the environment and endangered species can be difficult. But children’s book series Children’s Books for Kids Who Care breaks down the facts to help them remember! 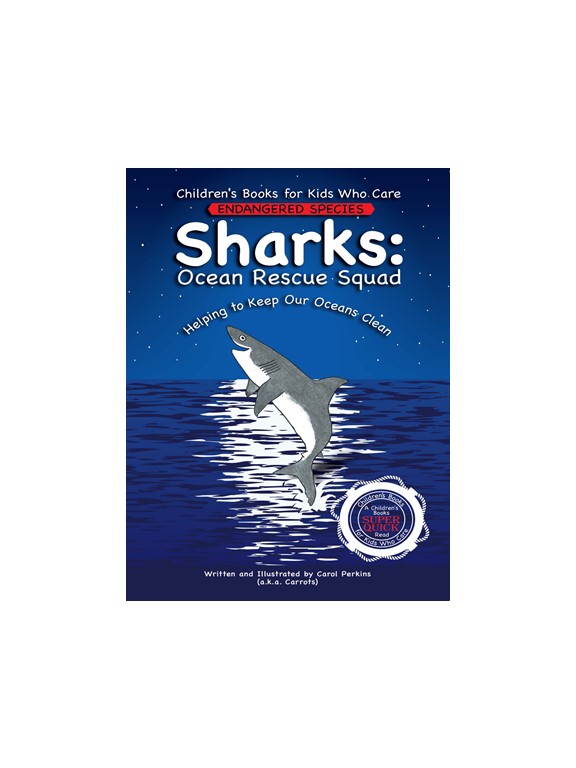 Every generation deserves to know what’s going on in the world, from climate change to endangered species. That’s why Children’s Books for Kids Who Care have created a series that teaches children the facts, starting with ‘Sharks: Ocean Rescue Squad’ by Carol Perkins.

The newest release from the author, also known as Carrots, is intended to teach facts about particular endangered species children, in this case, sharks. Carol has also announced that the next book in the series will cover the subject of rhinoceros.

Go to https://www.childrensbooksforkidswhocare.ca for more information.

Carrots’ latest book has been developed as a suitable method for providing small, memorable pieces of information on the subject to young children, to ensure that they are aware of endangered species from an early age. Both written and illustrated by Carol herself, the book discusses the role of sharks in the underwater ecosystem, diluting the information so that children can more readily absorb it.

Ever the student, Carol stumbled across her interest in animal protection and the environment during her time as a business analyst, finding herself quickly drawn into the topic. Discovering that after 40 years in business, there was much she still had to learn about the world, she decided to pursue imparting this information to a younger generation in the form of non-fiction books.

When writing ‘Sharks: Ocean Rescue Squad’, Carol proceeded with the knowledge that our children generally take information in better when it’s broken down into bite-size pieces, rather than an intimidating, large book. She has taken care throughout the book to use memorable illustrations to demonstrate her points, appealing to the various styles our children often display.

The book mostly focuses on interesting, memorable facts about sharks, including some statistics that your kids are more likely to retain. It covers the basics of how sharks are vital to helping the oceans remain clean, due to their part in the food chain, and discusses the reasons they have become endangered along with so many other species.

With the latest announcement, Children’s Books for Kids Who Care continues to expand its range of informative non-fiction for kids, in both paperback and eBook format.

“I look forward to researching and writing about many more endangered species spreading awareness of their value,” says Carol. “I hope to encourage a more positive approach worldwide to protect them, as they play a significant role in our survival.”

Children’s Books for Kids Care is the book series you can rely on to help your children learn about the vital role animals play in the way the world works!

Ready to learn more? Visit https://www.amazon.com/Sharks-Ocean-Rescue-Endangered-Species-ebook/dp/B08PQ3T4PJ to get your copy!

Children's Books for Kids Who Care

More News from Children's Books for Kids Who Care