A new take on science fiction and fantasy as been launched by author Bonnie K.T. Dillabough in her series ‘The Dimensional Alliance.’ 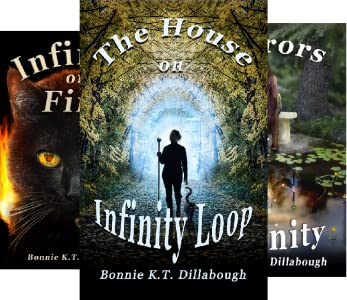 For fans of science fiction, fantasy, and adventure this new novel series will become your new favorite!

The launched book series currently comprises three books, The House on Infinity Loop, Infinity on Fire, and Mirrors of Infinity. The series follows main character Jenny, a twenty-something ghost blogger living in Los Angeles who inherits a house, a cat, and a key from an aunt she has only met twice in her life.

Bonnie began writing at the age of eight when she developed a love of the craft and has been writing in some form all of her life. She has worked in several jobs that required concise and marketing writing as well as writing blog posts and scripts for online videos. She has now published her first fictional novel series.

Bonnie K.T. Dillabough says that the series is science fiction that reads like fantasy, featuring a look into the origin of legends from a scientific viewpoint. She wondered if there was a scientific explanation to myths such as Big Foot, which became the inspiration for her novels.

Speaking of the series, Bonnie K.T. Dillabough said that “you can expect dragons and other fantasy creatures portrayed in a way you never saw them before.”

You can find the book series on Amazon, as well as on Ingram Spark if you need copies for book stores or libraries.

Bonnie K.T. Dillabough is happy to take part in any interviews for her books, and you can find a press kit for the series if you are a media professional.

The press kit consists of digital copies of all three books, cover art, a bio, and headshot and can be found here http://dimensionalallianceheadquarters.com/press-kit

A reader of The House On Infinity Loop said: “It was fascinating how sci-fi, fantasy, and normal people were mixed to create a realistic yet extraordinary story. I would definitely recommend this story to anyone who enjoys fantasy, sci-fi, or adventure stories.”

Dive into the world of ‘The Dimensional Alliance’ today!

You can click the URL above for more information.

Set Your Children Up For Early Reading Success With This Expert Phonics Program
Enjoy The Thrill of Love And Danger From This Three-Part Romance Novel Series
Enjoy Your Favourite Historical Western Romance Series In Multiple Formats
Read The Best Montana Romance Novels From This Bestselling Amazon Author
More ...