A coalition of space and space adjacent companies has signed a letter to Congress on the urgent need for space infrastructure investment. 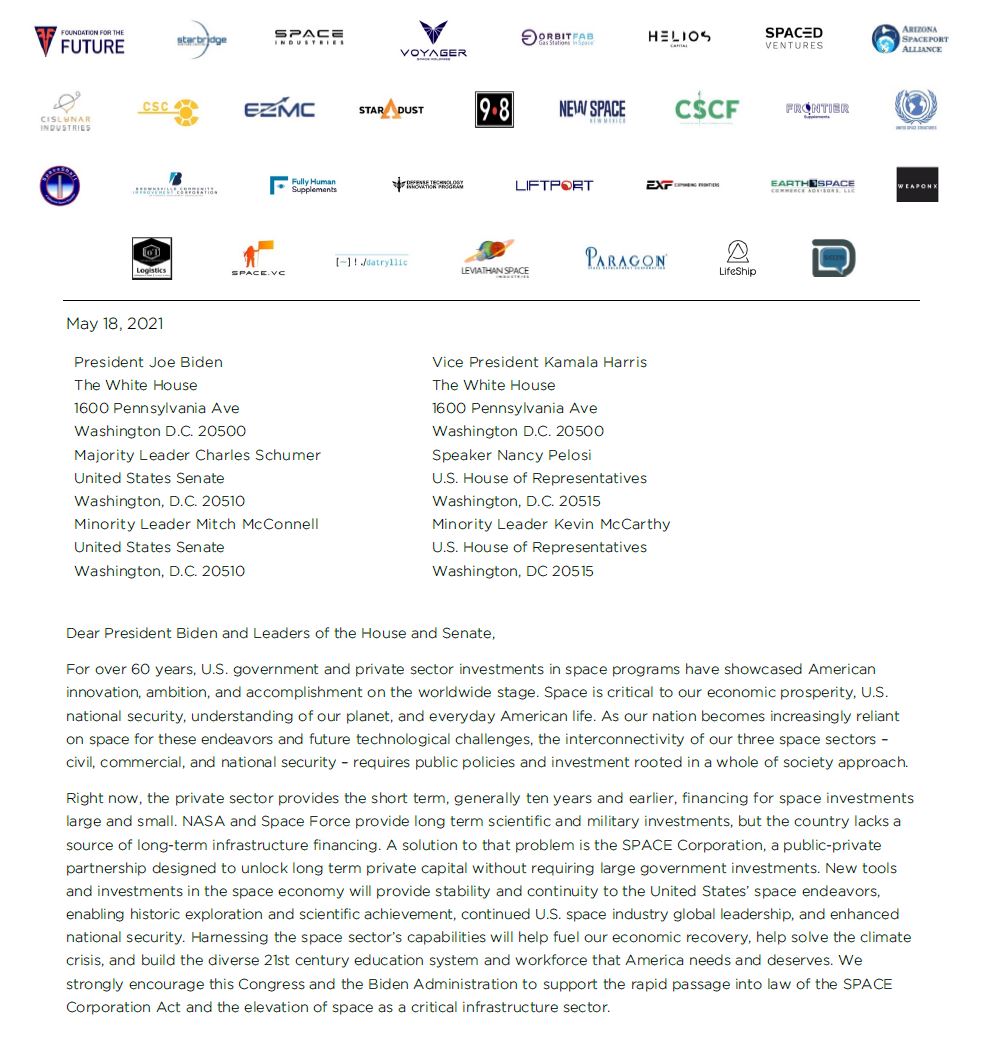 Dear President Biden and Leaders of the House and Senate,

We the undersigned are a mix of space and space adjacent companies ranging from startups to larger industry players. What unites us? We are bursting with innovators eager to thrive in the new space economy. These people are not limited in their dreams and capabilities, but limited by the risk and high cost of entry. We are not backed by billionaires or massive public companies. And you won’t find them on this letter, not because they don’t believe in the plan. But rather because backing a change to the system is risky. Whether a company is going through regulatory compliance or seeking government contracts, public support for a project in Congress is something that can only be done once or twice a year. So why risk their chance on something that isn’t certain.

This same situation is playing out in space financing, and Wall Street has no appetite for risk it cannot understand. The solution we are proposing to Congress, the SPACE Corporation, is one tool, and a really good one, to buy that risk down. It is not a government solution. Not a private solution. But the best of both. It is a bold plan, but one whose components have all been tested independently.

The reality is, an industry’s success without financing is near-impossible. It is like expecting a flower garden to grow without planting seeds. And like that garden, the US economy needs seed financing to be ready for the 21st century of competition in space. That seed comes when we merge the best of Wall Street with the best of Capitol Hill and use that to unleash the innovation and fire of the private sector.

We must act now because every day without action is another our peer competitors like China pull further ahead.

The SPACE Corporation Act of 2021 builds upon the priority bi-partisan and US primacy in space policy that was initiated during the Kennedy-Johnson Presidencies in direct response to Sputnik, Soviet manned space travel, and our directive to be the first on the Moon with Apollo. The Foundation for the Future supports the precedents of Congress in passing federally chartered corporations, such as COMSAT Act, to move the US forward in telecommunications satellite technology, and other corporate bills in our past to deal with important national needs, such as electric power development with the Tennessee Valley Authority during the depression era. We face a similar “race” to space which requires a joint public- private sector entity designed to fund and support space development and infrastructure, similar to the building of the Erie Canal, the Transcontinental Railroad, and our air, sea, and road highways serving the public. Now we must focus on space.

For additional information on the SPACE Corporation Act and how to support its passage, please contact Tim Chrisman, Executive Director, Foundation for the Future at tim@f4f.space or John Chwat, Director of Government Relations at johnchwat@mckeongrp.com.

Foundation For The Future

More News from Foundation For The Future

A new kind of space conference
Jan 11, 2021
Learn How We Can Access Sustainable Resources With Space Port Authority Project
Oct 14, 2020

Natural Skin, Beauty & Hair Trends For 2021: Eco-Friendly Natural Skincare
The LA celebrity way of speeding healing from a break-up or divorce: Hypnotherapy
Simple, easy, and effective steps to manage your responses to unforeseen events altering your day.
Get The Best Chiropractic Care For Carpal Tunnel Syndrome In Solana Beach, CA