Time to enter into the digital era by Coding !!!

Are you looking for your child develop the great game of ages? Here you are! At 98thPercentile, we are offering free E-Book to help Children have exposure to Basic coding and hands on experience of developing their own Pacman game. 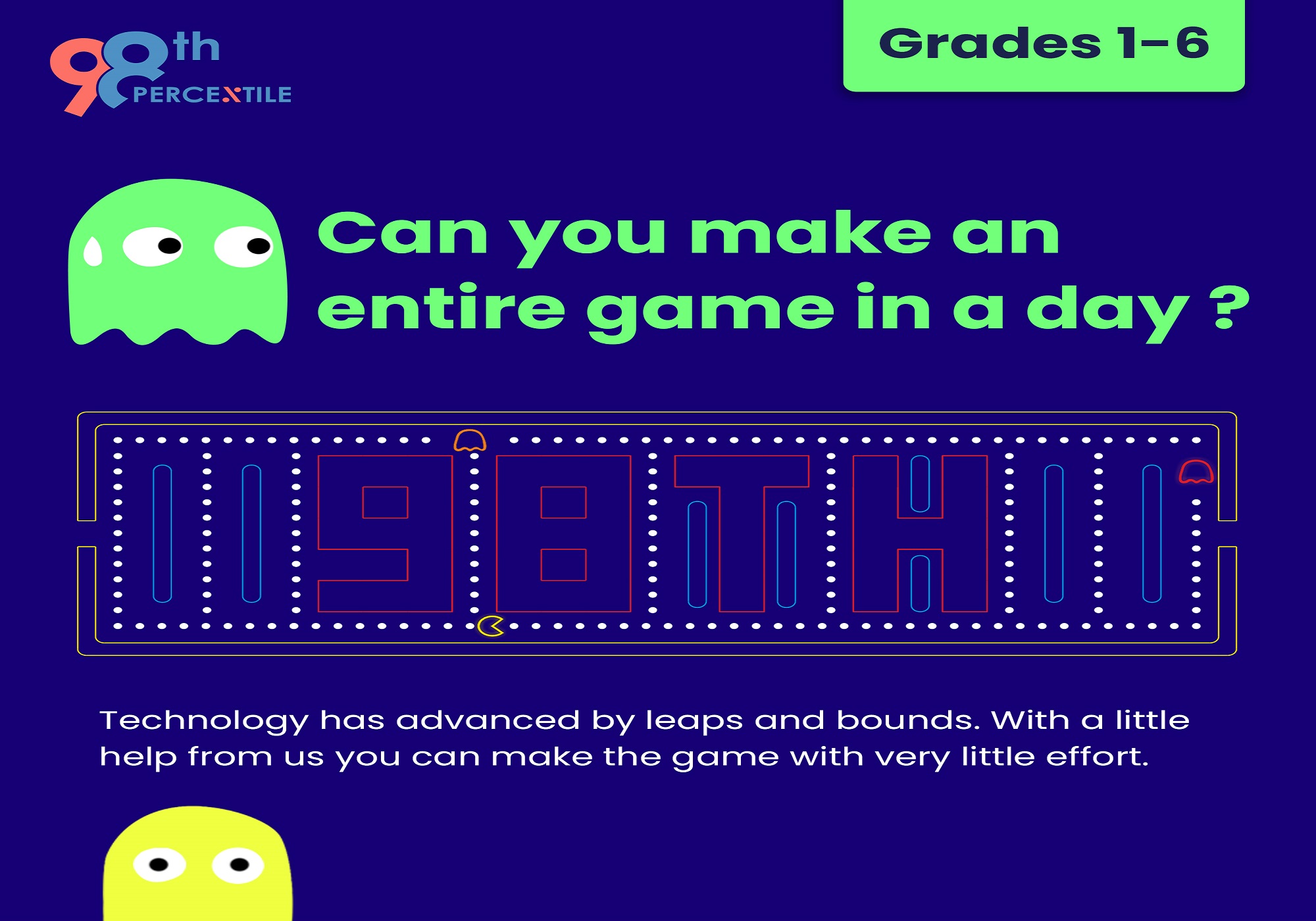 Do you love playing video games? Of course yes, who would not! And have you ever thought to yourself what if I can design it too? But you do not know coding or programming language. The same was the trouble with the young game designer; Toru Iwatani who created a legendary video game, Pacman that took the world by storm. Pacman, a Maze arcade game was released by Namco and designed by Toru Itawani in 1980. The uniqueness of the Pacman game is that anybody who plays it instantly understands what’s going on. Many of the most popular video games then, were violent and centered around conflict. Pacman instead, would tell a story, open to interpretation.

“I was eating a whole pizza while I was thinking about making a game-themed after ‘eating’. It was then that I came up with Pacman’s game design after looking at the pie with a slice taken from it.”, says Itawani. How interestingly the idea was envisioned to make a game that was based on eating. In Japanese slang, ‘paku paku’ describes the snapping of a mouth open and shut, and thus the central character, resembling a small pizza with a slice cut out for the mouth, was given the name Pacman. ‘Pacman’ was a cute and simple diversion from life’s twisting paths for millions of others. For others, it served as a reminder that life is a perplexing maze in which we are either fleeing or chasing our ghosts. All we can do is keep eating at the end.

Let me take you through the interesting history of how Itawani designed the game.

Itawani did not have any coding knowledge when he first joined Namco- a video game developing company. Namco formed a small video game development team within the organization and assigned them the task of researching multiple NEC microcomputers to see whether they could be used to develop new games. He was one of the first people assigned to this division. After developing many video games, Itawani felt that arcade games only appealed to men for their crude graphics and violence. It was then, the idea of creating a non-violent game that appealed mostly to women was seeded. Itawani enlisted the help of nine other Namco employees to assist in the production to create simple gameplay and cute and attractive character designs.

Itawani was interested in creating images that communicate with people. And he believed that the computer is not the only medium that uses images; one could also use movies or television or any other visual medium. He had no special training at all. He is not a programmer and only developed the specs and designed the features, but other people who worked with him wrote the program.

Pacman development took a year and five months to complete, the longest ever for a video game up to that point.

To read more about how the game developed hop over this article.

Pacman is still remembered after 40 years. The explanation is as straightforward as his design. The images Itawani and a team of seven created for the first ‘Pacman’ game in 1980, are forever embedded in pop culture. Having no coding knowledge, Itawani worked with a hardware engineer, one person who composed the music, and the other 5 people. They tried out each feature as they went along. If it was not fun or did not add anything to the game’s complexity, they dropped it. Creativity can be a ladder for your success and ideas can help you create history. Itawani did not have coding knowledge, but his ideas were so strong that he created a history in the video game industry. So, inspiration exists, but it must find you working.

Get The Best Photojournalistic Candid Style Wedding Photographers In Houston TX
The LA celebrity way of speeding healing from a break-up or divorce: Hypnotherapy
Simple, easy, and effective steps to manage your responses to unforeseen events altering your day.
Get The Best Chiropractic Care For Carpal Tunnel Syndrome In Solana Beach, CA