The Legendary Ghost of Vietnam Has Been Uncovered

Discover the gripping fiction novel of a rookie journalist forced to track down one of the most intriguing and dangerous mythical tales of a spirit from the Vietnam War era while fighting for his own survival, with the potential to be a Hollywood movie or TV series. 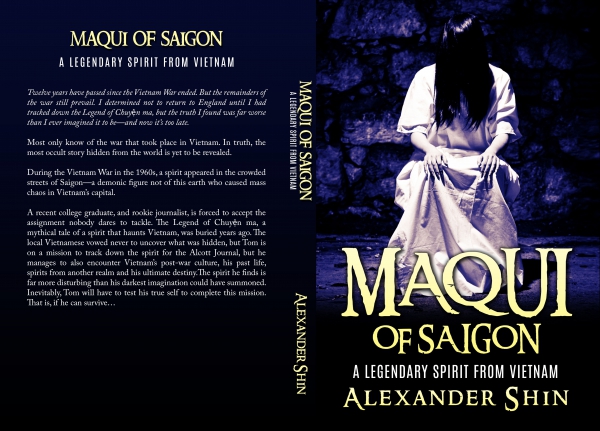 More information is available at https://www.amazon.com/Spirit-Saigon-Legendary-Vie…

The ‘Maqui of Saigon: A Legendary Spirit from Vietnam’ is the latest release by the popular fiction writer Alexander Shin and draws on the author’s extensive knowledge on Vietnam, the Vietnam War, metaphysics or the spirit world and past lives, to provide an engaging fictional story for the paranormal genre aficionados.

The book focuses on a recent college graduate and rookie journalist with the Alcott Journal, forced to accept the assignment of tracking down the Legend of Chuyên ma, a local and hidden mythical tale of a spirit that appeared in the crowded streets of Saigon and caused mass chaos in Vietnam’s capital city during the Vietnam War in the 1960s.

The ‘Maqui of Saigon: A Legendary Spirit from Vietnam’ fiction novel chronicles the dangerous and perilous journey of the journalist, Tom, while he encounters and explores Vietnam’s post-war culture, his own past life, mythical, hidden and occult local tales along with a demonic spirit while struggling for his own survival.

More information on the ‘Maqui of Saigon: A Legendary Spirit from Vietnam’, available as a Kindle e-book or paperback format on Amazon, along with details on the half Asian, half Caucasian author who has lived most of his life in Asia behind the engaging spirit fiction novel as well as multiple reader ratings and ‘critiques’ can be consulted on the website link provided above.

The author, Alexander Shin, explains that “Maqui of Saigon: A Legendary Spirit from Vietnam is a fiction novel with a gripping ghost story from Saigon that focuses on past life regression, the spirit realm and Vietnam after the war, with the potential to be a Hollywood movie or HBO series someday”.

He adds that “the book starts from the premise that most only know of the war that took place in Vietnam but in truth the most occult story from that era is yet to be revealed and a rookie journalist is forced to accept the assignment nobody dares to tackle. His mission is to track the legend of a spirit buried years ago, if he can survive”.

Get Reliable Professional Fencing Installation & Decking With James Nimmo
Your Local Orange NJ Business Deserves A Makeover Without Compromising Security
Get This Thermometer For Babies Toddlers And Even Pets, Accurate and Medical Grade
Tupelo MS Tourists Have New Restaurant To Dine At Near Elvis’ Birthplace