Louisiana Gold Party Leader, Xan John, announced his candidacy for United States Senate in the 2020 election. His campaign is marked with passion for American freedom. 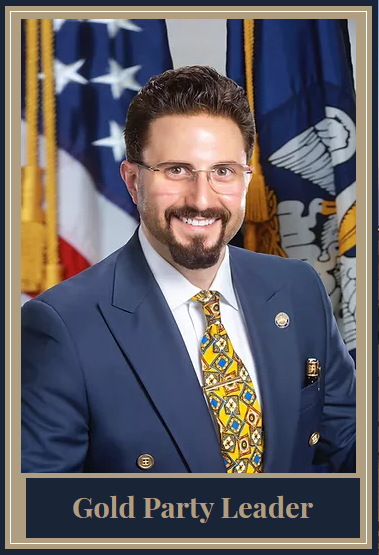 In the wake of Covid-19, Americans have experienced a systematic reduction of their fundamental freedoms at the hands of the American government, in response to recommendations by the United Nations and the World Health Organization. These restrictions have caused millions of hard working Americans to be forced out of work, and millions of business owners have had such strict limitations placed on their operations that they have been forced into closure and bankruptcy. The government has also imposed and enforced restrictions on churches, which is seen as a slippery slope to greater government control and further limitations of fundamental civil liberties. The nation seems to be more divided than ever, with Conservative Republicans and Liberal Democrats seeking primarily to oppose each other and rarely to come to intelligent and collaborative solutions at the center. These factors have contributed to many Americans searching for a third party, the Gold Party, solution in government who they can trust to fight for their freedom.

This is precisely why Xan John is running as the Gold Party Leader in the United States Senate Race in Louisiana. Xan John states, “If we should err, it should be on the side of freedom.” He believes that many men and women throughout our history have made sacrifices and risked their lives to ensure that we preserve and protect our American freedom. Many now are choosing instead what they perceive to be safe over what will ensure the continuation of liberty. Xan John is determined to protect our Constitutional freedom, including freedom of speech, press, assembly, and the right to bear arms. He has primarily Conservative views with the exception of wanting to usher in development of alternative sources of energy production, and wants to limit the reach of Big Pharma, by reducing required vaccinations and preventing the money-motivated development of a Covid-19 vaccination from being required for American people.

Xan John is a Patriot, a Constitutionalist, and supports Capitalism. He is a supporter of our President Donald Trump and wants to continue the work to eliminate the portions of government who have sold themselves to lobbyists and large corporations at the expense of the American people. Xan John feels that now is the time for someone to stand up to the government’s pursuit of control. His slogan is “Demand your freedom. Demand Xan John.”