Dancingstar Productions presents the crowd-pleasing film “Bride+1,” just in time for Cinco De Mayo and Mother’s Day. “Bride+1” is a romantic comedy about a bride’s race to get a groom before her biological clock runs out! 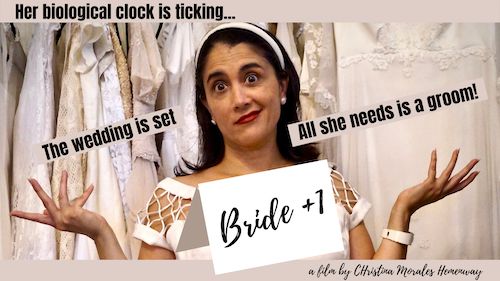 Audiences have had high praise for “Bride+1″…“Two thumbs way up!” -Hollywood Tattle Tale. “I laughed so hard I peed my pants.” -anonymous audience member. “I will be better to my wife because of this movie.” -Michigan Theater audience member.

“Bride +1” is a romantic comedy about Clarrissa; a 39-year-old, successful, interior designer. She knows how to be a lady in the living room, a tiger in the bedroom, and a mom in the kitchen, yet she’s never been married. Her urge to have kids is unrelenting, so she decides to hire a videographer and at the next family function makes a huge announcement: she’s getting married! To whom? She doesn’t know. She’s taking a leap of faith to make it happen, and to have the whole adventure captured on video. Clarissa believes that “If she builds it, he will come.” She asks her best guy friend to be her Maid of Honor, and they have a blast picking out her flowers, cake, and invitations. Along the way, she has many bad dates. She tries all kinds of crazy tactics to attract her life-mate. Nothing works. The big day arrives, but it’s much more than anyone expected.

“Bride +1” has been described as “My Big Fat Greek Wedding” for the Latino community. It celebrates a diverse cast of Latino actors but has played to mixed audiences and received a 500-seat standing ovation.

Morales Hemenway shared that she had not planned on playing the lead role. “When the actress I wanted was busy, I knew I could step in, after all, I learned from one of the best. I studied with world-famous mime Marcel Marceau. There was one problem: I wouldn’t be able to get down to “camera weight” by the time of filming. Then I realized that I was in a unique position as a female director. I could hire a full-bodied Latina as the romantic lead, I could hire myself. The challenge was I’d have to get past my own insecurities and use them for the character.

The idea for “Bride+1” came about when two of my dear friends “of a certain age” were dumped by men that said they wanted children, and then didn’t. I was so mad that I channeled my energy into writing the script. My anger turned into humor and resulted in a comedic look at Clarissa’s path to motherhood. The most difficult challenge during the filming process was losing my own mother, to whom the film is dedicated. Halfway through filming, my mother died of ovarian cancer. The loss was devastating. It took a long time for anything to be funny anymore. The mother/daughter relationship is an integral part of the film, and the mother character represents my voice as the author. It’s very strange to be watching a scene with the character I wrote, with my mother in mind. Strange that my mother is gone, and yet this wise and funny character lives on.”

On Mothers’ Day, watch the film with your mother either in person or virtually at 2:30 pm pacific/5:30 pm east coast time and then join the on-screen Mother/Daughter duo (Christina Morales Hemenway and Paloma Morales) afterward for a conversation about motherhood at 4:00 pm pacific/7:00 pm east coast on Zoom. For the trailer, viewing platforms, and RSVP links click here: BridePlusOne