Who knew Cribbage The Board Game was almost 30 years old and loved so much!

Three previously unpublished facts about a board game based on the card game of Cribbage called “Cribbage The Board Game”. Further information can be found at https://cribbagetheboardgame.com. 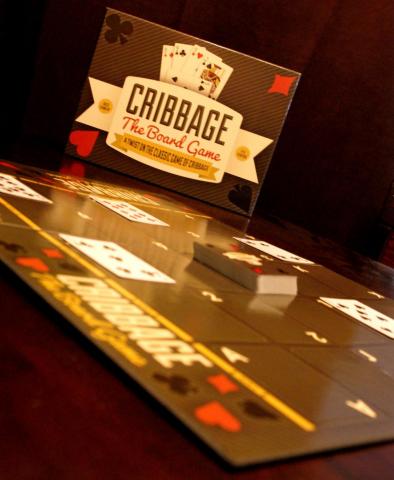 MyWarCo Ltd has today made public 3 as yet unreleased facts, of which fans and consumers within the cribbage and board game players space should find particularly interesting. ‘Cribbage The Board Game’, a unique and fun board game based on the age old card game of Cribbage, is available at our new ecommerce website as well as on Amazon. The only retail outlet currently carrying the game is the wonderful chain of Calendar Club stores located across Canada. MyWarCo Ltd. would certainly be interested in more retail partners in Canada, USA and worldwide.

The 3 items include nuggets such as how:

The idea for creating Cribbage The Board Game came about in 1989 when two childhood buddies played Cribbage using intersecting rows of hands, face up on the kitchen table. The two followed up on this by hatching the idea to create an actual game board because they loved the way the game played but knew they could make it even better….

Cribbage The Board Game was almost a year in the making, to get the game board design and our unique rules of play fully worked out. These two pals were the design team and had no idea what was involved in creating a board but were up for the challenge. With feedback from their every loving spouses and a few friends and family members they were basically the sole developers of Cribbage The Board Game. So there they were, two small town boys now men with growing families and full time jobs turning into after hours board game developers. Basically they proved to themselves and others that regardless of your experience in a given field, with the right amount of effort and belief anyone can achieve whatever results they dare to set their mind and heart toward.

Their board game concept was based on the age old card game of Cribbage but almost didn’t see the light of day. Of course starting out they had a very limited budget so production and packaging the game was a big challenge. Their homes became packaging and warehouse facilities. Their spouses and children began factory workers. On one hand it seemed like an impossible and sometimes ridiculous task they were attempting and on the other hand it brought them even closer together as friends and family. They were truly risking it all and learning on the fly but in their hearts they knew the game was a blast to play so the confidence was always high that future customers would come. Finances and workload was carefully managed, keeping the inventory components at an affordable level while every penny made from new sales was pumped back into more game components.

The duo did something different compared to other businesses in the cribbage and board game players space. Along the way there were others with a similar board game idea but this is where the initial year of development and play testing paid big dividends. The copy right protected scoring method built into the game board itself plus the refined card hand configuration and playing technique made Cribbage The Board Game a real unique hit with customers. There truly was and still is nothing quite like it on the market.

Cribbage The Board Game was released with the hope to expose it to as much of the world as possible. The original, traditional card game of Cribbage was first created almost 4 centuries ago by Sir John Suckling, an English poet. The longevity alone tells us how enjoyable and popular this card game has been. The creation of this new game board version has added a enhanced level of enjoyment without disgracing the originality of the game. And since introducing Cribbage The Board Game almost 30 years ago a great number of players from around the world have sent wonderful reviews and notes of thanks for making this grand old game just a bit more grander. The ultimate goal is to continue to delight traditional Cribbage players with this fun and exciting format for the game as well as introduce new players, young and old, to this great game. This unintended team of two have always believed it important foster and promote the personal interaction that board games bring to our culture and society. Cribbage The Board Game has proven to not only be a load of fun to play but also a great method to teach math and problem solving skills without the student even known they are being taught. Playing this game builds social skills, math skills and problem solving skills all while having a pile of fun. And that’s what the designers really want to see. And now they hope to see Cribbage The Board Game available in as many different countries as possible by 2020…!

Cribbage The Board Game was founded in 1989 by Wayne Tardif and Myles Warken, two childhood friends who grew up in small town Saskatchewan in Western Canada. They formally created the development/marketing company for the game in 1990. The game fills two consumer needs: #1 – entertaining personal interaction #2 – development of math and problem solving skills. Tardif and Warken basically had absolutely zero experience in the board game industry when they started out with the idea to create Cribbage The Board Game. .

Warken is quoted saying: “We like to do things to connect with our customers. Over the years Wayne has done a fantastic job keeping the game available in retail locations located across Canada. He also demonstrates the game in local shopping malls and participating retailers, during the Christmas shopping season. We have had a basic website over the years to allow folks to connect directly with us and now hope our ecommerce website and presence Amazon will make it easier for folks to get the game. It has now been 28 years since our very first launch of Cribbage The Board Game.”

To find out more, it’s possible to visit https://cribbagetheboardgame.com

Cribbage The Board Game

Become A Franchisee And Operate Your Own Youth Sports League In Your Community
Servcorp Virtual Office Business Solutions: New 2022 Virtual Office Prices Added
This Lansdale, PA Digital Marketing & SEO Agency Gets Your SMB Seen On Google
Kickstart Your Career in Sport and Exercise Science With This Online Program