Truestarz working with the biggest and brightest in the industry, we find Jakk using his natural talent and time to connect with the new upcoming stars with mega-hit potential. 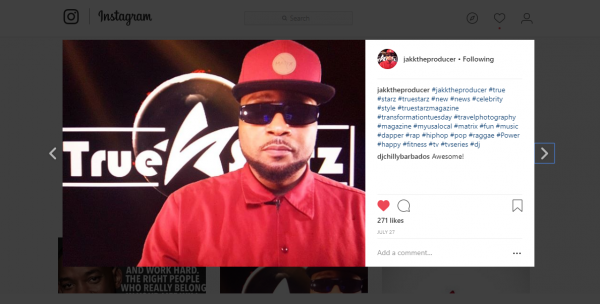 We uncovered some facts and history about the superstar producer Jakk…

While Jakk is a producer from Pittsburgh PA. Jakk was originally Jakyl, a rapper in a group named Roughside Playas. His group were the first local rap artists to have a rap song “girls dem” produced by Mindbender productions with a smooth sample from Freddie jackson added into regular rotation in Pittsburgh’s only hip hop & r&b radio station WAMO.

Jakk as a rapper was signed to a single deal with So So Def records under Jermaine Dupree’s father Michael Mauldin . Jakk climbed the local charts beating all the major acts from Western Pennsylvania & Eastern Ohio for the weekly live contest on WAMO called battle of the beats for 5 weeks straight. Jakk who was then Jackyl, would open up for most of the major acts filtering thru Pittsburgh, Cleveland & Wheeling West Virginia. Jakk began to travel to New York City, where he linked with his cousins Jeff Star & Wesley Goodman booking agents, and they quickly placed him on major competitive stages where he made music with Ugod of Wu Tang, Rockwilder, Herbie luv bug, Devin Horowitz of Nature Sounds Records & J.Hatch of Istandard , which was then faces in the crowd.

Going on to work with some of the biggest and brightest in the industry a list that would go way beyond one media release, we find Jakk using his natural talent and time to connect with the new upcoming stars with mega hit potential.

celebrities like the Jacksonville Florida songwriter and artist V Presha of MOAK Ent among others. The partnership with Truestarz and his success coach Star Riley came together as a result of Jakk’s desire to conquer the BUSINESS side of the music business.

“Star Riley has been a constant positive coach in my corner and after hammering in my mind over and over how it’s important to establish a solid business foundation. It was natural that I chose to work with him directly when it comes to setting up as he would call it a Legacy business.” States Jakk

While his younger brothers Tarrus Riley and Kush Riley continue the front end of the entertainment business Star Riley has silently built an entertainment empire over the years finding and investing in talent across the world.

“Others seek credit me I love helping people. The path forward is more business than music more entertainment industry than music industry, but overall more people need to consider the business they are in and strive to achieve higher levels using systems and processes.” says Star Riley when asked about his role in the music world

From artist to producer to celebrity stylist Jakk not only makes the hits he provides artist who work with him a classic A&R spirit even helping his talent and the public find their best look with his Jakkthecelebritystylist.com project.

Rather than attempt to push Jakk towards studio work Truestarz embraces his individual project and production process, promoting how communicating with and staying connected with the public as a celebrity stylist has improved his production craft over the years.

Discover more about the Truestarz brand and connect with Jakk The Producer for hit making production and artist development at https://truestarz.com/contact-us/ or directly https://www.instagram.com/jakktheproducer his IG account.

Become A Franchisee And Operate Your Own Youth Sports League In Your Community
Arlington Health Insurance Survey Shows Americans Dental Coverage is too pricey
Boost Mental Clarity With Creative Writing Therapy for Seniors In San Bruno, CA
Become A Job Search Expert With This Fort Worth, TX Career Coaching Program