Crypto Beadles interviews Brock Pierce about his career from acting in The Mighty Ducks to building digital gaming currencies for World of Warcraft and Second Life to developing cryptocurrencies like EOS went on to raise $4.1 Billion in its ICO. 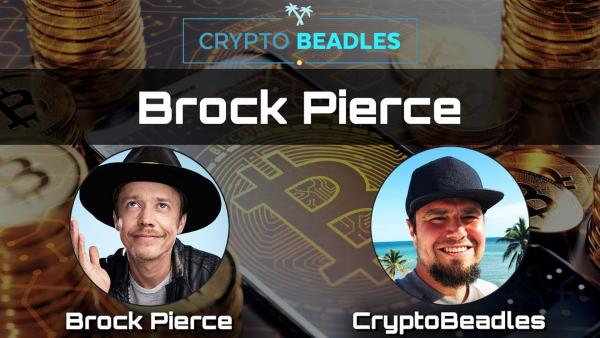 This time Crypto Beadles interviews the one and only Brock Pierce. Crypto Beadles is a YouTube channel focusing on the Cryptocurrency, Bitcoin, Alt-coin and Blockchain Industries. Robert Beadles, A.K.A. Crypto Beadles, interviews leaders in the crypto space to help people learn more about crypto and blockchain technology. His goal is to help people become knowledgeable about crypto & blockchain, and has value to offer everyone from the complete newbie to seasoned blockchain developer. Since around Christmas of 2017, Crypto Beadles’ videos have garnered close to 14 million views, and his channel currently has over 75,000 subscribers. He also gives away $100 worth of free crypto on almost every episode he publishes so people can learn about crypto on his dime.

Part one of the Brock Pierce interview:

In the first part of the interview, Brock Pierce shares his past and background in acting. Some may remember him from The Mighty Ducks. He goes on to explain how he became involved with digital currencies in World of Warcraft and Second Life. Mr. Pierce also talks about how he figured out he couldn’t personally own 50-100 companies; so he started a fund, BlockChain Capital, and has invested in 50+ companies in the crypto space since its founding. Brock also reports how studying over 1,000 companies has given him an ability to see everything from a macro level, almost like a “crystal ball.”

Brock Pierce breaks down the four pillars of the entertainment industry and explains why he picked the gaming pillar. Throughout the interview, viewers will learn his philosophies of life and business. One such belief is that “rising tides raise all boats” and how choosing a growth sector helps all companies in that sector.

Another big thing Mr. Pierce has done was move down to Puerto Rico in 2013. With his insight, he noticed that banking was a considerable challenge for Bitcoin and cryptocurrency companies. Brock did a lot of research and ended up starting one of the first Crypto banks called “Noble Bank” in 2014. While living in Puerto Rico, he noticed that due to the lack of opportunity, many people who were studying in Puerto Rico usually ended up leaving to the continental US after they earn their degrees. The situation has created a drain on the country and limits the growth potential as most of the higher educated people would leave. Brock is now building a startup culture there and discusses tax incentives the US offers to help bring startups to Puerto Rico.

As the video interview continues, Brock shares about EOS and how it was the largest ICO in 2018 when it raised $4.1 Billion. Crypto Beadles inquired about how $4.1 Billion is going to be allocated. The first security token, B-token, was created in 2017 by Brock Pierce as well. Another subject they both discussed is how difficult it is for companies in the crypto space to be held accountable through the use of audits. He explains this is due to how the auditing world works and many auditors simply do not want to have the liability of having their names linked to cryptocurrencies. Mr. Pierce talks about bull and bear markets. He believes the wrong people come into markets during a bull market. It’s bear markets when great things are created.

Part two of the interview:

In the second part of the interview, Brock Pierce discusses how Steve Bannon was his right-hand man for years. He also shares how to check an idea to learn if it will make a little money or a lot of money.

One thing you will get from this video is how passionate Mr. Pierce is about making what happened to Mt. Gox right again with creditors. He has spent seven years on his project he calls Gox Rising. During the interview, they talk about what happened with 850,000-1,065,000 Bitcoin. Pierce boils it down to mainly two options: A good choice in which creditors are given their money back as fast as possible, and an even better choice, creditors are given more than everything back to include possible income revenue from the new Mt. Gox exchange’s operations. Brock discusses other players in the Mt. Gox lawsuit like Coinlab wanting $16 billion and Mark Karpelès wanting about half. He believes that this would be a bad outcome due to it showing businesses come first and customers suffer. This is similar to how traditional banking has worked in the past. Mt. Gox is a big reason many traditional institutions like banks say they don’t want to get into the crypto space.

If the creditors receive the money, it produces an excellent outcome for the entire crypto space. This would be turning one of the worst things to hit the Cryptospace around. It could go a long way to helping negate the arguments many have against adopting cryptocurrencies. It also brings back the philosophy from the first video of a rising tide raises all boats. He discusses how a project like Gox Rising will help the entire crypto ecosystem. Similar to how a phoenix rises from its ashes as it’s reborn through fire, Mt. Gox Rising would be that symbolic phoenix in the crypto space. Lastly, before the interview concludes, both Brock and Crypto Beadles share their crypto security tips for people to avoid losing their crypto.

Find Affordable QA And Speech Analytics Services For Your Contact Center
Get The Best Technical Support And Customer Service Solutions For Your Business
Get The Best Employee Cybersecurity Training To Protect Your Organization
Commercial Property, Buildings Can Reduce & Monitor Water Usage by 15%-25%+
More ...