Maybe you know the quote from Otto Lilienthal: To invent an airplane is nothing. To build one is something. But to fly is everything.” Call BWI Aviation Insurance (800-666-4359) if you plan to get a Daher TBM. They understand! 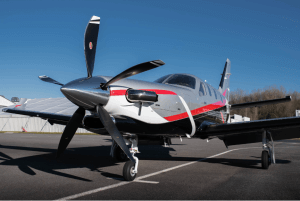 Did you know that during World War II, the United States produced almost 800,000 aircraft propellers?! That’s a lot of propulsion!

BWI Aviation Insurance, an A+ rated aviation insurance agency, has just issued a new report explaining how to get the most affordable Daher TBM insurance coverage based on the owner/pilot’s flying profile and requirements. While the Daher TBM 900 series is considered an especially safe line of single-engine turboprops, the firm recommends obtaining an aviation insurance policy that matches your specific risk exposure.

BWI Aviation, which was founded in 1977 and introduced the country’s first Cessna 180/185 insurance program, recommends in the new guide that owners spend as much time as possible practicing – and logging flight hours – on the plane model they intend to buy before purchasing insurance. Two currently popular Daher planes are the TBM 960 and the TBM 910.

Formed in 1911, Daher is the world’s oldest aircraft manufacturer still in operation today. The company, which also provides a range of industrial engineering and manufacturing services, is best known as the builder of its sleek, fast, and comfortable single-engine turboprop planes named TBM. There are currently over 800 Daher aircraft in service and the flagship TBM 930 was launched in 2016, becoming the fastest single-engine turboprop aircraft in the world. The firm’s partnerships with Airbus, Dassault, and Embraer help to make it a trustworthy company for first-time private plane owners.

As the guide explains, a new Daher TBM owner can choose among an array of insurance policies that best suit their needs, but you should also consider working with an experienced partner – such as BWI – to help you review all your options, even once you have already enrolled in a program such as Socata TBM insurance.

One satisfied BWI client commented: “I worked with both Kristen Suarez and Jackie Sallee, they have both been amazing. They went above and beyond for me. Buying an airplane is tough enough it is nice to work with such professionals that make it just a little easier.”

Daher TBM planes are both thrilling to fly and very safe. But as you know, you can’t account for everything – and peace of mind is paramount when you’re up in the skies.

Go to https://bwifly.com/aircraft-insurance/daher-tbm-aircraft-insurance and see for yourself what the options look like and then give BWI a call at 800-666-4359. They’re super friendly and knowledgeable!