1. Person who has watched every Bollywood movie

This includes all the crazy a#s Bollywood frenzies who have to watch a movie every Friday. Movies are like oxygen. If they don’t see a movie within a week, they figuratively suffocate. Even the staff members of the Cinema house recognize them. They know EVERYTHING about Bollywood movies, A to Z. So, you better not argue with them! I wonder what would they do if there’s only one movie releasing with KRK as the leading actor.

2. The one who just comes for the food: pretty common breed

Popcorn, burger, and a large coke – they’re always snacking and can’t seem to stop, EVER! They buy the biggest size of the pop corns available and munch they’re way through the line to their seat. They can be annoying at times, producing some obnoxious noises from the mastication of nachos, popcorn or chips distracting others from watching the movie in peace. At one point, you may have to ask “When will you f**king stop?”

Also known as vulgars, these are the most popular and annoying bunch of people who come to the cinema with a mission to obliterate other’s movie experience. They always come in groups and have this urge to whistle and hoot at the intimate scenes, not giving a shit about others. They have no sense of personal space and enjoy making a lot of noise and distract everybody.

4. The one who tells the spoiler before the movie starts

Another bunch of annoying people who sadistically enjoy revealing the spoilers, suspense and the whole story of the movie whilst watching it. If you sit near one, you are in big trouble. You’ll know the whole story already at the time of interval. If you realise you are sitting next to one, sit away from them! Run away as fast as you can.

5. The one who needs to update everything on social networking sites

They are the ones who are constantly glued to their mobile. They tend to disturb others by either flashing the bright light (Dude, Come on. Lower the brightness!), with the constant noise of tapping the phone and the worst one – talking on the phone. Specially the ones with cheesy ringtones like ‘Munni Badnaam Hui’ or ‘Sheila ki Jawaani’. Dude, you’re not in your living room. 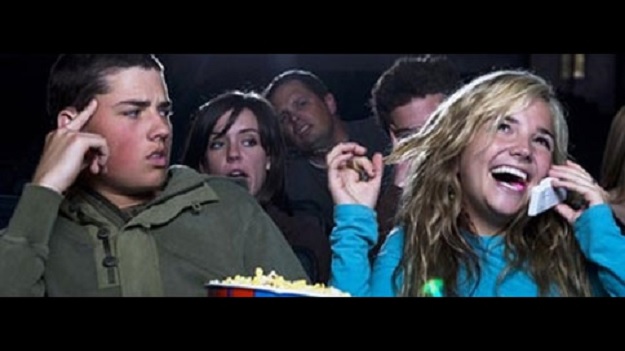 6. The one who comes to the theatres just for the darkness

In this modern era, you will find a ton of young couples coming to the movies, cuddling and making out a bit. They are found exclusively in the last rows or the corners or extreme ends of the hall. You’ll always find these couples while watching romantic movies.

These are equally annoying as the ‘rowdy ones’. They bring their little babies with them to the hall and annoy the hell out of everyone. These babies crawl around, scream, cry and even puke at times. The parents themselves don’t watch half of the movie in the effort of making them quiet. Ever heard of a baby sitter people?

8. The one who is ‘ever-overwhelmed’

The most emotional people of all. It’s almost like they’re watching a movie for the first time. For them, every dialogue is funny, every scene is emotional or scary. They have an awful sense of humour and laugh on stupid jokes as though it’s the first joke they’ve ever heard. Calm down, it’s just a movie.

9. The one who is always restless

As the name suggests, these are the most fidgety lot of people. You’ll see them coughing like a hound, moving their seat every now and then, getting up quite often to go to the washroom. They are the ones who are least interested in the movie and are brought forcefully with someone.

They are the last ones to arrive at the hall and cause a stir to get to their seats, stepping on toes and pushing the people in the process.