Slingshot Dragsters sported ferocious blown & injected Hemi engine power. Earlier versions had a front engine & when racing smoked the tires and lifted the front up, making for a spectacular sight 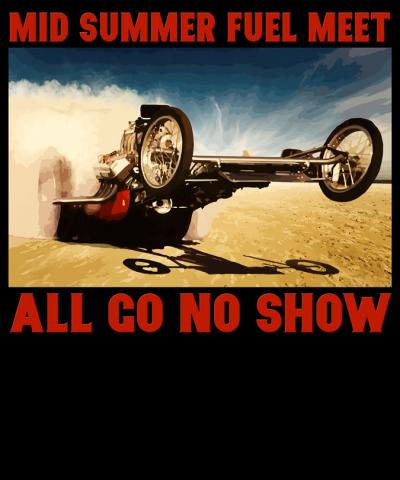 Meet the deadliest beast that took birth on the drag strips of the 1960s. Also known as Diggers, Slingshots or Rail, the Dragster cars have now been commemorated by a brand new T-shirt by Quarter Mile Addiction carrying the slogan, “Mid-Summer Fuel Meet, All Go No Show”.

Ruling the drag strips during their lifetime, the front engine Dragsters sported ferocious hemi engine power with supercharging and injection. The earlier versions had a front engine, and when racing smoked the tires and lifted the front up, making for a spectacular sight. The Slingshot Dragsters ran the Top Fuel class, but over time converted to a rear engine design. The Slingshots in particular experienced fatal crashes, with exploding clutches or engines with serious injuries to the drivers. The reason being the driver literally straddled the transmission and virtually sat a top the rear end differential. With the transmission between the drivers legs, the engine sat barely three feet in front of them, this was a recipe for disaster.

The first Slingshot appeared in 1954 and was made by Mickey Thompson. Ed Donovan too launched a 417 Donovan Hemi, which was a Chyrsler aluminum copy. The first driver to exceed 260mph and 280mph in professional drag racing, Joe Amato, is more popular as a Dragster driver. He won the NHRA Top Fuel championship five times, a record in itself. Slingshots can be seen in action today in nostalgia drag racing, albeit with limits on fuel mix, horsepower and speed. For more info on the Slingshot front engine dragster, also known as a Digger, along with the new t shirt by Quarter Mile Addiction, visit the link here https://www.quarter-mile-addiction.com/top-fuel-digger-front-engine-slingshot-dragster

The new, Made in USA T-shirt by Quarter Mile Addiction celebrates the Slingshots and Dragsters, and is available in small and XL sizes. Buyers can also obtain an exclusive coffee mug. Orders placed online are usually delivered in 5-10 business days. For those who simply can’t wait, a speed delivery service in 3 days is also available. Further info about the drag racing t shirt brand can also be found at this link http://quartermileaddiction.com

What Is The Best Brand In Australia To Design A Custom Cycling Kit For Women?
Get Custom-Designed Mountain Bike Jerseys In Sydney, Melbourne, Perth and Brisbane
FlikIt FlikIt Football delivers fun and excitement to households and tailgating!
Get The Best Thermal Lap Throw For Sports Games With Smartphone Accessory Pouch
More ...