Jam Run by Russell Brooks has launched on IndieGoGo. For only $20 you are guaranteed an advanced reading eBook copy of this exciting new thriller. Pledge now and make it happen. 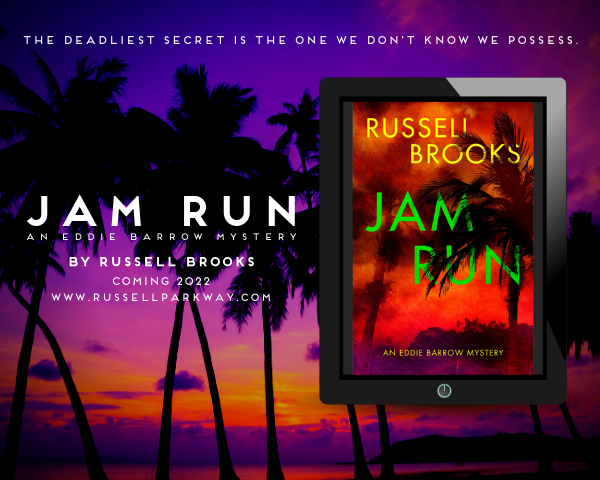 Brooks is pleased to announce that JAM RUN—the long-awaited sequel to CHILL RUN—is scheduled to be published in the first quarter of 2022. Today, JAM RUN launches on the crowdfunding site, IndieGoGo. In this novel, Brooks brings back inquisitive author and amateur sleuth, Eddie Barrow, and his outspoken best friend, Corey Stephenson. After witnessing a gruesome murder while visiting Montego Bay, they both get roped into finding the killer—only to end up evading ruthless assassins once they uncover evidence of a larger criminal conspiracy.

“When social and systemic barriers discourage victims and witnesses of hate or sex crimes from coming forward, it empowers the abusers,” said Brooks. “I’m appalled at the level of social acceptance of the ‘Buggery Law’ and other similar laws in the Caribbean. Vilifying a community with discriminatory laws has repercussions on society,” he added. These are some of the roadblocks that Eddie and Corey encounter that complicate their attempts in getting justice for the victim.

Jam Run is inspired by actual events in Jamaica that sent shockwaves around the world. This is why JAM RUN “is a gripping crime thriller about the ever-present menace and violence the LGBTQ communities face daily,” according to Montreal journalist and Fugues Magazine columnist Richard Burnett.

What others thought of JAM RUN

“Jam Run is a bold adrenaline rush that leaves you on the edge of your seat. The consummate page-turner of the year.” Julie Kindle—Key West, Florida.

“Once again, Russell Brooks has drawn me into his world. A blessing to see the author’s passion for details and character development shine from the first pages.” Antonio Tolliver—Muskegon, Michigan.

“Jam Run instantly captivates you and takes you on a ride to Jamaica. What starts as two friends hanging out soon turns into a mystery that leaves you wanting more. Another must-read by Russell Brooks.” Nate Drysdale—San Antonio, Texas.

“Jam Run is a fabulous thriller that keeps you on the edge of your seat while you read it. I was taken from one extreme to the next, never knowing what is going to happen next! It left me yearning for more!” Laura Clay—Norman, Oklahoma.

Born in Montreal, Quebec, Russell Brooks is a Canadian author of Barbadian ancestry. JAM RUN will be his fifth novel in his second thriller series. Brooks is a former track athlete who represented Canada at the World University Games in 1999 in Palma de Mallorca, Spain in the 100m, 200m, and 4x100m relay. He also has a degree in Biology with a minor in psychology from Indiana University in Bloomington, IN.

New Amelia Rose Western Cowboy Romance Is Ideal For Your Next Summer Kindle Read
Get The Best Animal Wildlife In Captivity Photography Book For Your Coffee Table!
New Black Owned Publishing House In Oakland Offers Platform To Authors Of Color
This Latest Book By Epidemiologist Dr. Davis Will Inspire You To Take Risks
More ...