Martin Koloc: We haven’t ever done more for our success at Dakar before!

The 44th edition of the famous rally competition will start in Ha’il, Saudi Arabia, for the first time. And the Buggyra team is going to enter with 2 TATRA trucks and 1 Can-Am special. The three-time winner Ignacio Casale will be joined by a talented Buggyra Academy member and a new French champion Téo Calvet, who is preparing for his Dakar debut. In the T3 category, the legendary six-time champion Josef Macháček will be defending his victory from the last year. 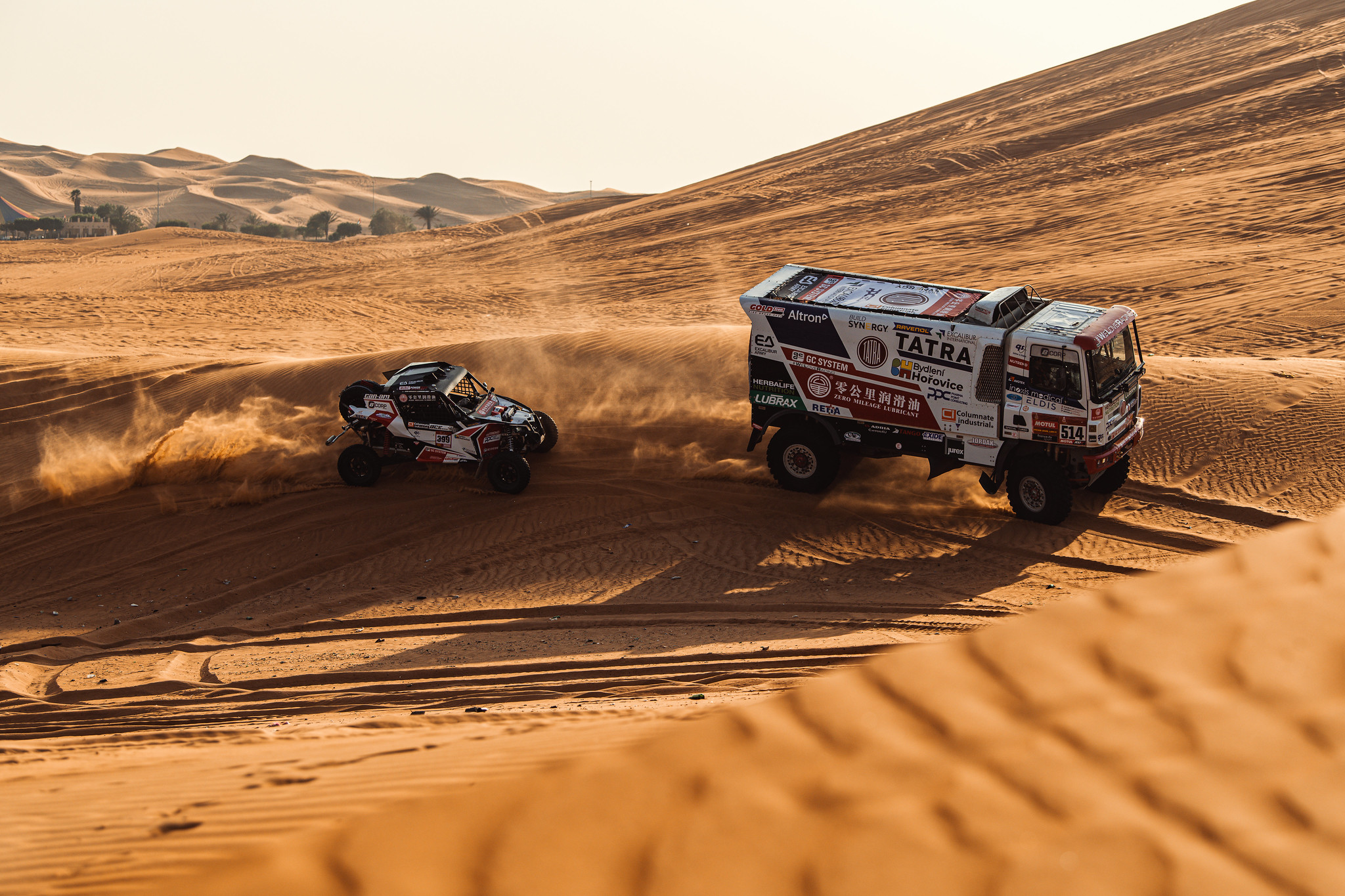 “For this year, we’ve had an unprecedented amount of preparations with three huge testing events at Dubai and Saudi Arabia. And if you also add the upcoming Rally Hail competition in December, where we’re going to announce even more news, we haven’t ever done more for our success at Dakar before.”

“In the truck category, it was clear right away that we’re going to continue with Ignacio Casale. He’s a big professional and what he has shown with a new truck at the testing – it was a great step forward and so motivating for us all. Also, it was clear that we’re going to fill Martin Šoltys’ seat with a rookie from the BUGGYRA Academy. Following his performances in testing, and in circuit truck racing, it just had to be Téo Calvet. And I’m particularly excited about his performance. And, of course, there were no doubts that we want to defend our victory from last year with Josef Macháček and Pavel Vyoral. Even though we’ve done another step forward in our development, with a competition like Red Bull or PH Sport, it’s going to be a fight!”

“If I didn’t feel like I can do it, then I wouldn’t. After our return, I’ve heard how great it would be to end on the top, but that’s just not me. I’ll be racing as long as I can and I’m glad to have such strong support in BUGGYRA. Also, we have a clear goal to prepare an upcoming generation of racing drivers by my side, which is a big motivation for me. When you look into a starting list, there’s a huge competition. It is always good having a starting number with double 0 and I’ll try to enjoy the free racing line for as long as I can, but I know that these young wolves, especially from Red Bull, will be going after us right from the start.”

“I believe that Tatra is a truck that I can succeed with. We’ve done a lot of practice this year, either with the team in Dubai, or Alvaro in Chile, where we even managed to win the T3 category race, so I’m very excited about the upcoming event. It’s a completely different ride with new modifications and an automatic gearbox, and with this team’s support, we believe in it. My goal is to be in a TOP 3, but I’m standing with both feet on the ground, so if it’s going to happen this year or the next, we’ll see. And it’s great that we can run together with Téo Calvet. We met each other recently in Kopřivnice during an event, and it was clear that he has racing in his blood.”

“For me, it’s a dream come true. And I really appreciate this opportunity. To grow up with a father, who lives and breathes Motorsport, including Dakar, it just couldn’t even go any other way. I believe that we’re ready, we’ve done so much testing, in both Europe and Dubai, where I’m just flying for the final test and to prepare for my first race (he laughs). So far so good this year.“

“To be testing in the desert is a huge step forward to improve and to develop our vehicles. In the Trucks category, we bet on our tested Tatra Phoenix, with a bigger focus on better weight distribution and better reliability of the components. Throughout the whole year, we’ve been working also on improving our Can-Am specials, and they now have even more power and offer easier service. As Dakar is now a part of the world championship, the T3 category has become our priority.”

The international manufacturer with Czech roots and more than 50 years of history is one of the biggest leaders in racing technology development in the world, with dedicated technological centres in Dubai (UAE), Estonia, China, Spain, and the Czech Republic. The first success of the BUGGYRA ZM Racing team came in truck racing, winning the European Championship 11 times, the Chinese championship 3 times and once also the Indian championship.

Since 2014, the Tatra Buggyra Racing works together with TATRA TRUCKS a.s. to race in the Trucks category in Dakar Rally – the toughest rally raid competition in the world. The biggest successes are two stage victories, while the best overall finish is 7th place from 2015 and 2017. Also, the TATRA specials took part in selected FIA Cross Country Rally World Championship events, where they took 4 victories since 2015 and won 3 stages in the Silkway Rally.

In 2019, the BUGGYRA ZM Racing team also decided to join the newly created lightweight prototype category T3. This project runs in a partnership with a BCE s.r.o. company, representing the Canadian manufacturer Can-Am SSV of the Bombardier Recreational Products. After a challenging debut, the team sent 2 vehicles to Dakar 2021, with Josef Macháček taking the overall victory in the category, adding his 6th Dakar triumph in total.

He started racing in 1974, even though in motocross. His first Paris-Dakar Rally came in 1999, where his only goal was to become the first Czech rider to finish the race on a quad bike. Over the next 10 years, he won the toughest race in the world 5 times, and he has become historically the most successful quad bike driver in the Experimental category in rally raid endurance events. Starting in 2011, he had moved to MD Rally Sport Optimus buggy of his own construction. In Dakar Rally 2020, he wore the BUGGYRA overalls for the first time and debuted in the Side-by-Side category with a brand-new special Can-Am Buggyra MK50 XRS. His goal was to finish the race and gather valuable data, which went as planned, with Josef finishing in 27th place. After five victories in the quad bike category, he added his sixth one in 2021 in the T3 category of lightweight prototypes with a Can-Am DV21 special, as he has also become the oldest Dakar Rally winner ever.

Ignacio Casale raced in his first Dakar 12 years ago, in a Truck category with his father. The following year, he switched to quad bikes, where he was victorious in 2014, 2018 and 2020, becoming the most successful Chilean in Dakar’s history. In 2021, he got behind the wheel of the truck for the first time, with a Tatra Phoenix and became the best driver with a manual gearbox. He finished the race in TOP 10 overall, in 9th place, losing only to trucks with an automatic gearbox.

The son of a famous truck racing driver Fabien Calvet made his first mark in Nogaro, 2017, where he took his first-ever victory in truck racing. In July 2019, he debuted in the FIA ETRC championship during a race weekend at Nürburgring, while he also became a Junior champion in the French Truck Racing Championship. Since the 2020 season, he has been a member of the Buggyra Academy and the Buggyra ZM Racing team. In 2021, he took 18 victories, became the youngest French champion, and took his first win in the European championship. He also became the 2nd best rookie in the FIA ETRC series and took 2nd place in the Good Year Cup.

Martin Koloc: Our NWES participation is the first step into the NASCAR ‘territory’
Nov 25, 2021
Martin Koloc: We are getting ready for the cross-country rally season in the Middle East.
Oct 30, 2021