If you’re looking for a badminton shuttlecock that can withstand wind and is the best for playing outdoors or at the beach, the Torques shuttle is what you’ve been looking for! It’s a brand new racquet sport. Iif you love badminton you’ll love Torques! For more info go to https://torques.tv 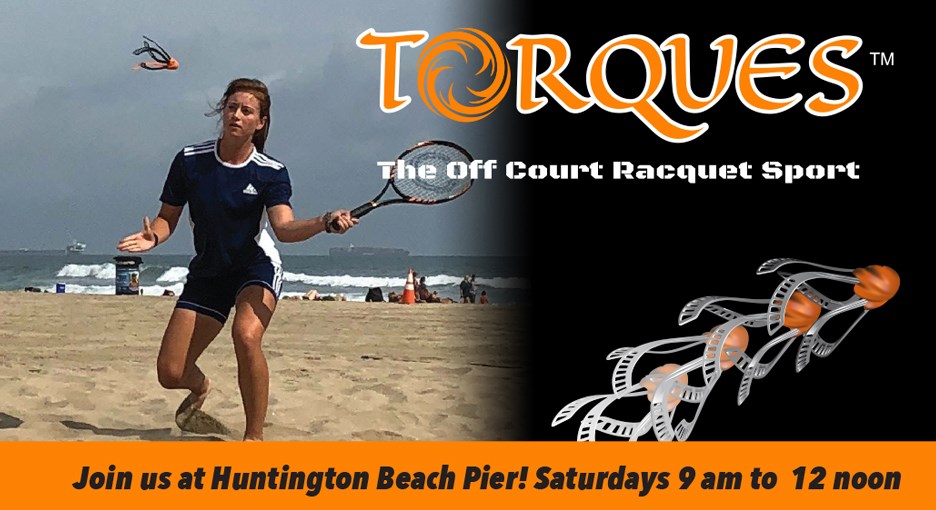 I love badminton and I love the beach. But playing badminton outdoors at the beach was sometimes a problem for me because the wind would blow the birdie away.

If you’re like me, you might be wondering if there’s a birdie that could withstand the wind. Then I found Torques and the Torque Shuttle! Torques is the off-court racket sport you’ve been waiting for. I certainly was at least. It’s a revolutionary new racket sport with a unique new shuttle made for optimal play outdoors. You can play in parks, beaches, even your own backyard. It’s the best of racquetball, tennis, and badminton all in one.

Torques was invented by Scott Peterson and the trick is the design of his version of the shuttle cock. He explains it simply as this. “Torque Shuttles are much larger and heavier than a traditional badminton shuttle. Torque Shuttles have 5 wings versus a badminton shuttle that has 16 feathers. If you like playing badminton but you don’t like that you can’t play in the wind, Torques is for you.”

Torques is played with tennis racquets and a unique, patented shuttle made of nylon, ABS, and polyurethane. Unlike badminton, which is meant for playing indoors, Torques is designed to be played outdoors. “Torque Shuttles can withstand the force of being hit with a tennis racquet, giving one the ability to take their tennis stroke to the beach, park, greenbelt, and front or back yard. This play anywhere benefit is truly fun,” Peterson continues. Its patented shuttle is scientifically designed to twirl through the air in windy conditions, up to 15 MPH, that would be problematic for a badminton birdie. “While Torque Shuttles are not indestructible, they tolerate a lot of play.”

To get more information or to purchase Torques shuttles, go to https://torques.tv/

You can find Scott Peterson most Saturdays on the sands of Huntington Beach, California with his nine-foot poles (patented Torques Flyzone) set up for games with friends, passersby and sometimes even professional athletes.

While in Southern California last July for a badminton tournament, Fabienne Deprez, German professional badminton player, happened upon a Torques game in Huntington Beach and joined in. According to Peterson, Deprez said “that she loved it and had a lot of fun.”

If you’re a pro-tennis fan, you might remember Jill Craybas who famously defeated Serena Williams in a surprise upset at Wimbledon. After playing Torques, she raved it’s “an exciting new game that you can play anywhere… It’s so much fun.”

You can watch videos of people playing Torques including Jill Craybas at: https://www.youtube.com/channel/UCftC5tHM0oThUZr3NjtIEDw/

So where did inventor Scott Peterson find his inspiration to develop a new game? Surprisingly in ancient weaponry. Peterson, an avid racquet sports player, began his quest for a more aggressive form of badminton in 1997 and spent over 20 years developing it. His breakthrough came when he looked to the ancient Celts.

“Around 200 – 300 B.C.,” Peterson says, “our ancestors would use rocks and twist rawhide around them, creating crude striking weapons.” How does it work? “Torques as a technical definition is a twisting force that creates rotation.” The result is a shuttle that works even in winds up to 15 mph allowing invigorating gameplay any time you want, almost anywhere you want.”

Torques is gaining fans from professional racquet sports players and everyday people from all different backgrounds.

Kelsey, a former high school tennis player says, “I love Torques, it reminded me of playing tennis. I’ve played tennis in high school and I loved it but this is even more fun because you can come out on the beach and play, you can play in the park, you can play it in your backyard and with your friends who maybe don’t know how to play tennis, you’re not a trained athlete you can play with anybody and have a good time.  It’s relaxed, it’s fun and you can rally back and forth.”

If you want to know when the next Torques meetup is, go to https://facebook.com/torques.tv

Get Custom-Designed Mountain Bike Jerseys In Sydney, Melbourne, Perth and Brisbane
What Is The Best Brand In Australia To Design A Custom Cycling Kit For Women?
FlikIt FlikIt Football delivers fun and excitement to households and tailgating!
Get The Best Thermal Lap Throw For Sports Games With Smartphone Accessory Pouch
More ...